Toronto (Canada) – JOURDAN RESOURCES INC. (TSXV: JOR; OTCQB: JORF; FRA: 2JR1) (“Jourdan” or the “Company“) is pleased to publish the first assay results of its summer/fall 2022 drilling campaign on its flagship Vallée project, which is located ~35km north of Val-d’Or in Quebec, Canada. The following highlights are from the first 10 holes.

*drill core width only, does not represent true width

As mentioned in a press release dated November 2, 2022, the Company has completed its previously announced diamond drilling program, with 6,585m drilled. The Company has now received the first assay results from the program and awaits further assays.

Last summer, diamond drilling was conducted to the east of the previous phases and aimed at the eastern and southeastern extension of the known pegmatite swarm with its anticipated lithium-bearing spodumene mineral. The Company intends to use the results of the drilling and assaying to update its geological model and to help the Company establish an initial mineral resource estimate at its Vallée property.

Since starting its drilling program in 2011, Jourdan has drilled seventy-nine (79) drillholes for a total of 16,145 metres.

Most of the 32 holes of the Company’s 2022 summer drilling campaign have intersected the new spodumene-bearing pegmatite swarm on Jourdan’s Vallée property at a previously underexplored eastern extension, which had not been exposed by the North American Lithium mine to the west of Vallée (see Fig. 1).

“We are extremely happy with the latest drill results. Not only did these drill holes intersect multiple pegmatites occurrences, but they also showed significant thicknesses and grades above 1% Li2O.”, said Dr. Andy Rompel, executive chairman of Jourdan. He continued, “Thus far, these last drilling campaigns have been particularly successful in building our confidence in the anticipated deposit size and grade we have at Vallée.”

“This latest drilling program has brought us closer to  establishing an initial mineral resource estimate at our Vallée property. The Vallée property sits immediately east of North American Lithium’s lithium mine, which we have been advised is expected to enter production in April of this year. There is significant mining activity in the Vallée area, and Jourdan continues to remain optimistic about becoming a key lithium player in the region at large,” said Rene Bharti, Chief Executive Officer of Jourdan.

The drill program was conducted by Forage LaMontagne Fortier from Rouyn-Noranda, Québec, under the supervision of Alex Belo Géologue Inc. (ABG Exploration) of Laval, Quebec. 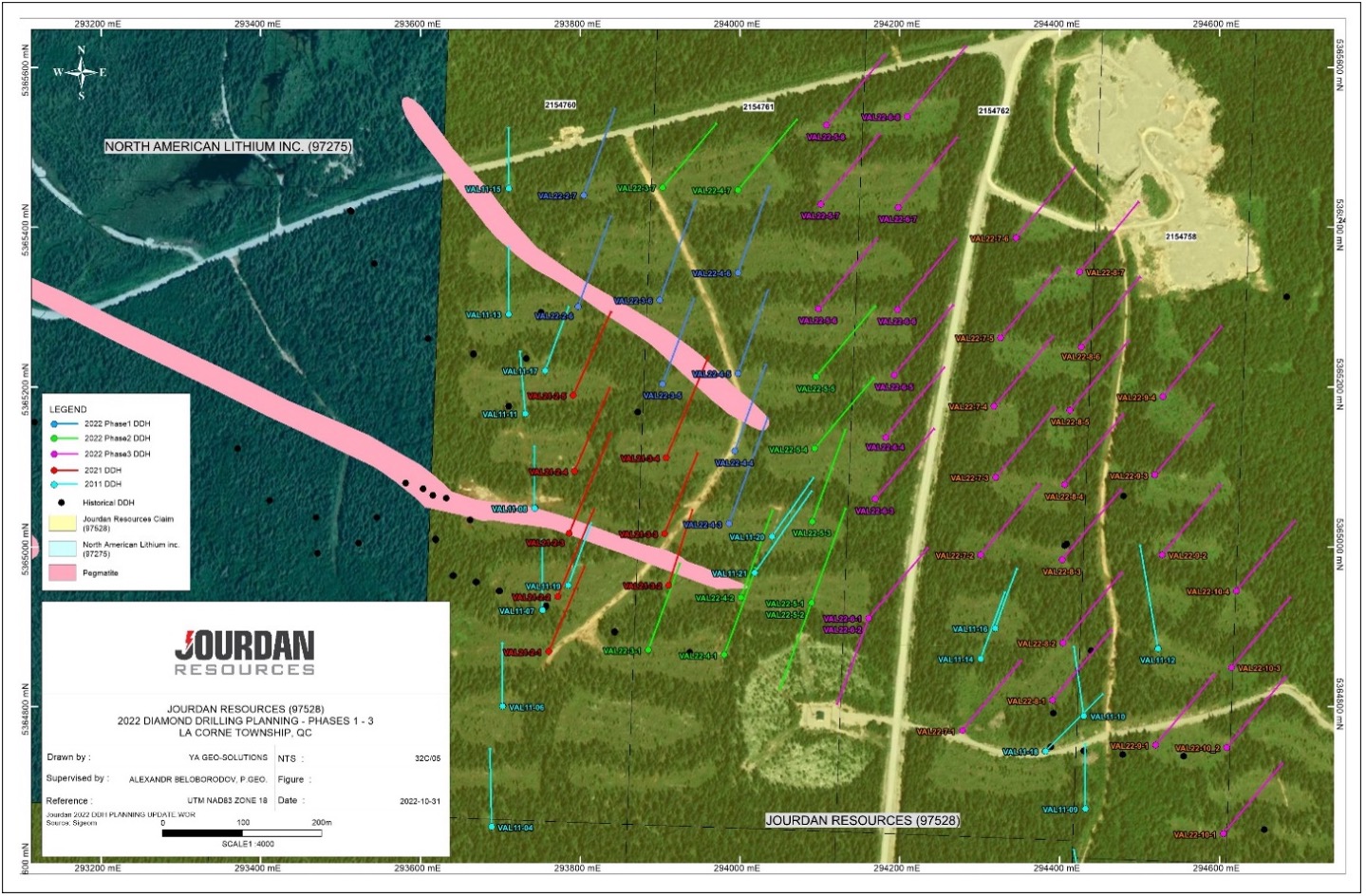 Figure 1: The Vallée property is immediately east of the North American Lithium mine. This figure depicts the 2011, 2021 and 2022 completed drillholes with a total of 79 drillholes since 2011.

*drill core width only, does not represent true width

** Sections of drill holes VAL22-5-6, VAL22-5-7, and VAL22-6-1 extended onto mining claims that the Company previously sold to North American Lithium. For more information about the disposition, please see the Company’s press release dated November 14, 2022, which is available under the Company’s SEDAR profile at www.sedar.com.

The scientific and technical information contained herein has been reviewed and approved by Alexandr Beloborodov, P.Geo., an independent consultant that is a “qualified person” as defined in National Instrument 43-101 – Standards of Disclosure for Mineral Projects.

Jourdan Resources Inc. is a Canadian junior mining exploration company trading under the symbol “JOR” on the TSX Venture Exchange and “2JR1” on the Stuttgart Stock Exchange. The Company is focused on the

acquisition, exploration, production, and development of mining properties. The Company’s properties are in Quebec, Canada, primarily in the spodumene-bearing pegmatites of the La Corne Batholith, around North American Lithium’s Quebec Lithium Mine.

The content and grades of any mineral deposits at the Company’s properties are conceptual in nature. There has been insufficient exploration to define a mineral resource on the property and it is uncertain if further exploration will result in any target being delineated as a mineral resource.

This press release contains “forward‑looking information” within the meaning of applicable Canadian securities legislation. Forward‑looking information includes, but is not limited to, statements with respect to the Company’s summer 2022 drill program, including in respect of the anticipated additional assay results and management’s expectations that they will extend the known deposit, North American Lithium’s ability to commence production at its adjacent Quebec Lithium Mine, and the ability of the Company to update its geological model and establish an initial mineral resource estimate at its properties, become a key lithium player in the greater Vallée area, and execute its business plan. Generally, forward‑looking information can be identified by the use of forward-looking terminology such as “plans”, “expects” or “does not expect”, “is expected”, “budget”, “scheduled”, “estimates”, “forecasts”, “intends”, “anticipates” or “does not anticipate”, or “believes”, or variations of such words and phrases or statements that certain actions, events or results “may”, “could”, “would”, “might” or “will be taken”, “occur” or “be achieved”.  Forward‑looking information is subject to known and unknown risks, uncertainties and other factors that may cause the actual results, level of activity, performance or achievements of Jourdan to be materially different from those expressed or implied by such forward‑looking information, including but not limited to: receipt of necessary approvals; general business, economic, competitive, political and social uncertainties; future mineral prices and market demand; accidents, labour disputes and shortages and other risks of the mining industry. Although Jourdan has attempted to identify important factors that could cause actual results to differ materially from those contained in forward-looking information, there may be other factors that cause results not to be as anticipated, estimated or intended. There can be no assurance that such information will prove to be accurate, as actual results and future events could differ materially from those anticipated in such statements. Accordingly, readers should not place undue reliance on forward‑looking information. Jourdan does not undertake to update any forward-looking information, except in accordance with applicable securities laws.

Jourdan Hires Roger Lemaitre as Vice-President and Head of Mining